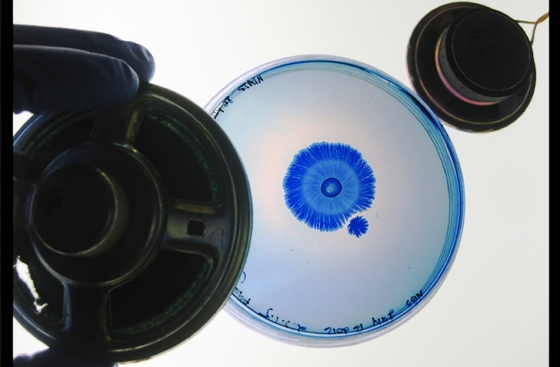 Inspired by the research and the work of Professor Eshel Ben Jacob from Tel Aviv University, of “The Social Life of Bacteria”, exploring complex network and communication systems of a “smart” microorganism bacterium. Specifically inspired by his research of the P. vortex bacterium known for its advanced social behavior, reflected in development of colonies with highly complex architecture structures.

This body of work looks into biological systems of self-organization, and collective decision making, the immense complexity within seemingly simple structures, and the process of achieving dramatically varied results with slight alterations in initial settings.

The Soundscapes series, part of the body of work Objectivity [tentative] Looks into morphogenesis and the complex social behavior and decision making of microorganisms using sound waves and a range of frequencies to visualize these complex architecture structures.

Sound to Shape, part of the Soundscapes series, is a performance and an Installation with live microorganisms, sound and bare-speakers. Conducting biological experiments with a live sound performance to initiate the artwork. Audio waves are, transmitted through the liquid agar-medium as it solidifies, forming sound-generated topographies for the bacterium to grow on.

These processes, often made in the confines of a biology lab, are performed live in a gallery space and shared with the public.

She is also a cofounder and the Art and Culture Director at Genspace, the New York citizen’s lab that is said to have pioneered biohacking spaces in the first place.

Her flagship BioArt project is Objectivity [tentative], which has been featured in Biodesign – a book published by the Museum of Modern Art (MoMA) on biology-inspired approaches to design and fabrication.

‘I was fascinated by the scientific methods of control setting, protocols and measurable situations versus spontaneous outcomes.’ says Nurit Bar-Shai, an interdisciplinary artist and educator, who is the co-founder of Genspace, the community biology lab in Brooklyn, New York, where she initiated and served as the Arts and Culture Program Director.

Bar-Shai’s prominent work with bacteria was inspired by the work and research of Professor Eshel Ben-Jacob of Tel-Aviv University, who was a pioneer in the field of bacteria systems, specifically with the Paenibacillus vortex, a microorganism known for its high social behaviour and self-organisation. Notably, P. vortex forms complex aggregations and colonies when grown under different conditions (or nutrients) that can be visualised using a dye. On the other hand; P. vortex is seen as ‘intelligent’ microorganisms because they communicate with each other using chemical signals or ‘chemical tweets’ that allow them to exchange information about the growth and environmental conditions amongst themselves.

Biodesign: Nature + Science + Creativity by William Myers is a book published by The Museum of Modern Art (MoMA) in New York and Thames & Hudson worldwide. It profiles recent design and art projects that use living materials and span a wide range of applications from architecture and industrial design to portraiture.